Salsa is definitely the most popular of all Latin dance styles! It's the perfect gateway into the fun world of latin dancing. No other activity combines it all like Salsa - your fitness workout, growing self-confidence, meeting and connecting with new people, relieving stress of every day life, and being your number one "going out" activity!

Salsa has been sweeping the world by storm for a few decades now! Come learn this fun & addictive partner dance, discover the world of latin dancing, and I guarantee you'll wonder how you went on without it before! Anywhere in the world, you can find a salsa club, where you'd feel instantly at home and welcome, and you'll be glad you joined this ever-growing family. 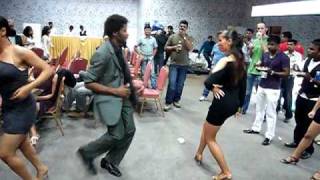 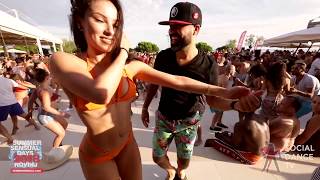 Owing to its history, and how it all got started, the world of Salsa is divided into several flavors. It gets a little tricky, because they are not all compatible with each other. But we're going to quickly break it down for you, so it all makes sense!

Think of it this way - Salsa as music can be interpreted in several ways, leading to the multiple competing styles of dancing to the same song. Neither of these is the "correct" way, they are just different.

Salsa on-1 - is one of the more popular styles (sometimes also called "LA style"), danced in clubs all around the world. It lends itself well to structured learning, and incidentally it is the style that we teach here in Nelson. If you're curious, the "on-1" bit references the count on which direction of the steps is changed.

Salsa on-2 - is a style that evolved from Mambo in New York in 1970s (hence known as "NY style"), and has quite a serious following. It has a smooth, jazzy, and elegant feel to it. And you guessed it, the "on-2" bit references the count on which direction of the steps is changed (also knows as "break step").

Cuban - is another highly popular style around the world, characterized by the circular movement, and utilising the 4th count. It tends to be more traditional, and have that street party feel to it. There are plenty of clubs in the world that prefer this style of dancing.

There are a few other styles (Colombian and Puerto Rican), but they enjoy less popularity in the latin dance scene. We prefer the "Salsa on-1" style because it tends to evolve forward, and stays relevant with the modern music of the day, which in recent years enjoyed influences of R&B and hip-hop (raggaeton), and also fusion with Western pop music through remixes.

Here in Nelson we teach and dance "Salsa on-1" style. Now you know, if anyone asks! 😊

Classes will be structured as an 8-week course to maximise learning, and to build on top of the material covered in earlier classes. It is highly recommended that you attend all of the classes. We cover a lot in each class, so you want to make sure you don't skip many!

This is accessible to everyone. And the benefits are enormous - increased confidence, breaking barriers to meeting new people, better posture and coordination, having fun to awesome music!

Masha has a real talent for teaching dance, and making it accessible to virtually anyone. She will break down every movement, and explain it in a structured way that makes sense. You will walk out a better dancer, guaranteed!

Masha was the first in New Zealand to introduce the syllabus based salsa courses, and today this syllabus structure has been adapted by the majority of salsa dance schools, which in return has raised and continues to raise the level of salsa dancing in New Zealand.

More About Your Instructors

Beginner Level – The most important level, this course is aimed for those who have little or no experience in salsa. We start from the very beginning with all the salsa basics, rhythm & timing. We will then continue with the fundamentals of partner dancing, basic lead and following techniques, turns and how to put it all together into basic figures and fun easy flowing variations.

Improver Level - For those who have completed Beginner Level and feel they are ready to move on, or may have done salsa courses elsewhere and are not sure where they fit in. This course will explore how you can change the look of the basics you have learned in Level 1 without changing the actual basic steps. It is here you will creatively explore the beginners level further and find out how much fun it can really be with the simplicity of the basics and its variations! This course will also give you an even more solid foundation and understanding of the basics and build your confidence to prepare you for the next level.

When can I start?

If you've never danced Salsa before, you'll want to join one of our Beginner 8-week courses that we run throughout the year. It is a good idea to join from the start, as we cover a lot of material from the get-go. It's ok if you missed the 1st week, and willing to catchup. However, if you missed first few weeks, it is best to join the next course when we run it. We are generally aligned to NZ school terms (as it makes it easier to plan with school holidays), and have one or two 8-week courses running from the start of the term.

If you have some experience with Salsa, then it is more of an individual choice. If you've only done some basic Salsa dancing anywhere else (or long time ago), you would probably still want to join our Beginners course - you'll find we teach differently to most schools out there.

If you are fairly confident with the basics already, you may want to challenge yourself further and attend our Improvers level course (see about levels above). While we do accept casual drop-ins ($20 / class), it may be overwhelming to join in the middle of the course, as we tend to build it up progressively, and base new material on what was covered before. You will get the best learning by joining and sticking with the entire course, as it is structured to maximise your learning of concepts, by aiding your memory through carefully selected repetition.

Classes only go ahead, if we have the required minimum registered for each class - so register early to avoid missing out!

Partners are not required, as we will rotate throughout the night.